I am sorry for that, but my time is not my own. While I wish with all my heart that I could be busy full time building my workshop, setting up my floor machinery, building my workstations and studying blueprints, I can’t. It is downright depressing at times, but life is like that, I guess.

You’d think I know that by now, but the kid in me refuses to grow up. At any rate, while I could not do all that I wanted to, I did manage to finish repairng 150′ of fencing and a few other fiddly little things here on the ranch. And I did make a few critical decisions about the new workshop. Except for one very critical decision which I will have to make in the next few days. Where to put it.

When you first start to build a workshop, you start start with what you will use it for, what floor machinery will have to go where, how much free space you will need to work safely around each fixed piece of machinery, what sort of workbenches and assembly tables you will need and where they have to go. That sort of stuff will give you a good idea of how much floor space you will need. Then jack that number up by at least twenty-five percent to cover storage space for raw lumber, tool racks, clamp racks, dust collectors and so on. Then think about doors and windows…and electricity.

You should probably pause there, and take a hard look at your budget. Unless you are Bill Gates, you probably cannot afford to build a shop as large as your dreams specify. And that’s my problem in a nutshell. I can afford (not really, mind you, since I have no budget to speak of), a workshop that will be 16′ x 24′ outside dimensions.. This will have a shed roof, with the low side giving an inside height of 10′ at the header and the high side a 12′ height inside. The floor will sit on 2′ x 12′ pressure treated pine, which in turn will be held off the ground by contcrete cones resting on two 24″ square concrete pavers (and, since this is hurricane country, lots of hurricane straps all around). I will use 3/4′ plywoood  for the floor, and build a mess of torsion box girders out of 2″ x 4″ pine covered by 1/2″ plywood and  fastened by construction adhesive and t-nails. Those girders will avoid the need for internal posts down the center of my work space. The roof will be 1/2″ ply, two layers of roofing felt and the whole topped will sheet metal roofing. The exterior walls will be T-111 siding, painted red, of course.

That’s the plan, and I’m sticking to it.

Back in the bad old days, folks wore slippers in the house. They kept a rocker near the bed to sit in while sliding out of those slippers and getting into bed. I built this one for my wife many years ago, and made it wide enough that she could hold our children while nursing them.

It’s built from oak. Those pins you see sticking up from the ends of the arm rests were cut short and then sawn down the middle so a wedge could be driven in to spread the peg inside the arm rest to hold all the bits together. Then they were cut flush.

This is a rocking chair, wider than usual as I stated above, and actually very comfortable to sit in. I had some Ash left over from that Shaker Bench I built, so I used that material for the two rockers. The back slats are straight, and flexible, with a large rib running along the back face to give a bit of added strength to the design. 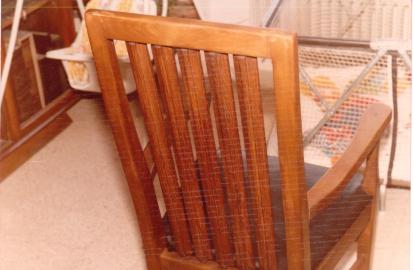 The seat is black Morrocan leather, with thick cotton batting under, and the whole covers a plywood base.

Gary Showalter was born in Honolulu, Hawaii. He lived in Aruba, Florida and the Panama Canal Zone before joining the U.S. Army during the 1960s. Following his discharge from the Army, Mr. Showalter picked cotton in East Texas, baled hay in Ardmore Oklahoma, sold light bulbs in Los Angeles, California, and built cattle pens in Fallon, Nevada (during a blizzard, of course). After settling in Atlanta, Georgia, Mr. Showalter worked as a professional gardener before turning his hand to furniture making. In 1981, he moved to Israel, married, and raised four children while working as a furniture maker, silversmith, goldsmith, and ornamental wood turner. He served in the Israel Defense Forces Reserves for sixteen years, and when not on active duty he worked in government and private security. He has also served in senior management positions in two software development companies in Israel. During his time in Israel, Mr. Showalter published articles dealing with international terror and the Israel-Arab conflict in the Jerusalem Post, Israel national News and several political science web sites. Mr. Showalter returned to the United States in the fall of 2003, to care for an elderly parent. He published his first novel, “The Big Bend”, in the fall of 2008. His second novel, “Hog Valley”, is now in print. Mr. Showalter's third novel, “Twisted Key”, was published in the fall of 2011, and his fourth novel, "Lonesome Cove" is now available in Kindle format and should be published in paper near the end of 2012. Those words were written a few years ago. Frankly speaking, the literary well has dried up. I now live in Dunnellon, Fl, where I amworking as the caretaker on a horse farm and looking to build a workshop here on the property where I can get back to building furniture. With any luck I will be sinking piers some time early in November and hope to have the floor joists ready for flooring by the end of the month. I'll get back to you on that.
View all posts by Gary Showalter →
This entry was posted in Furniture Making and tagged slipper chair, Workshop design. Bookmark the permalink.
%d bloggers like this: