I saw this piece in an old book…

I enjoy looking through books of old furniture. I know, I’m wierd; you don’t have to tell me.  In one of those books I saw this Shaker style bench and decided to build it. The entire bench is Ash lumber, with the seat made up of three pieces. Before I started turning the spindles for the back and legs I glued up the three pieces of Ash for the seat and then ran it about twenty times over a large table saw to cut kerfs down the length of the seat to define the curves. Oh, how I wish I had more photographs to show how this piece was built.

By the way, Ash is not easy to work. It is tough to cut, creates a lot of fine dust, is really difficult to carve with gouges and it takes forever to  work with a cabinet scraper. The grain in the material used was not as straight as I would have liked, either. Ash is not an attractive wood – not like cherry or walnut, certainly. But it does have several advantages in a piece like this bench. It is stable, tough as nails and will take a lot of abuse. Ash starts out as a very light colored wood and takes on a lovely, golden hue as it ages. 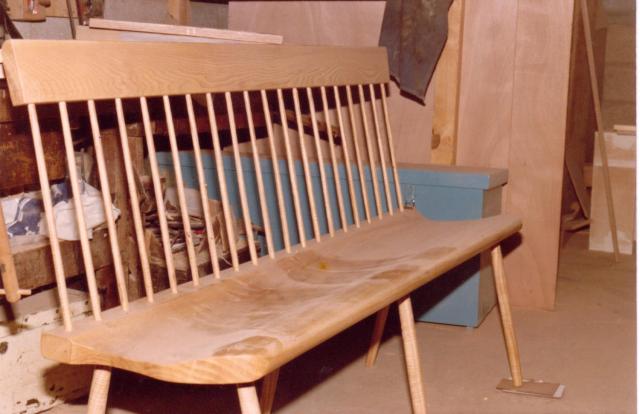 The bench is six feet in length, and amazingly light. Since I expected people to pick it up and move it willy-nilly, I finished it with a coat of sealer and then three coats of high-gloss poly on the seat and back panel. The spindles along the back and the six legs were turned, sanded and finished on my lathe.

Let’s get back to the seat for a minute. It took a full morning’s work on the panel saw. That machine is a truly massive beast with a five horse motor and a sliding table for cutting large plywood panels (easily a $25,000.00 machine, and not mine, by the way) I moved the seat onto my workbench and started whacking away at the waste wood between the saw cuts with my gouges to rough out the finished curves. After three days of that I switched to a curved cabinet scraper to bring the rough surface to a smooth, clean, continuous curve. Altogether, I spent nearly a full week just shaping the seat.

There is a lot of mathamatics is such a simple design, and a lot of art, as well. Whoever figured out all that stuff deserves a great deal of admiration. But it works well. I can tell you this; I would not want to fashion such a piece using only adzes, gouges spokeshaves and hand planes.

A few parting comments, if you don’t mind. When the old-timey craftsmen built such pieces, the seats, back panels and even the legs were usually made in a soft wood, such as pine or spruce. Not even those guys wanted to hack through ash or oak to shape the seat. But using a soft wood for the seat also required the use of cross-bracing on the legs to prevent racking as people shifted around on the bench. You can’t really see it in that photo, but the legs pass through the seat and are wedged (and glued) into place. The same would have been done back in the bad old days, but even that would not have kept the legs secure. With a soft wood seat, the legs would have worked loose without the use of an undercarriage.

I chose to use Ash as the seat to avoid the need for cross bracing. Even with the extra work in shaping the seat, I think it is a much cleaner and stronger design.

If you enjoyed this post, please visit my Kickstarter campaign. I can use all the help I can get. Go to http://www.kickstarter.com and search for my name: Gary Showalter

Gary Showalter was born in Honolulu, Hawaii. He lived in Aruba, Florida and the Panama Canal Zone before joining the U.S. Army during the 1960s. Following his discharge from the Army, Mr. Showalter picked cotton in East Texas, baled hay in Ardmore Oklahoma, sold light bulbs in Los Angeles, California, and built cattle pens in Fallon, Nevada (during a blizzard, of course). After settling in Atlanta, Georgia, Mr. Showalter worked as a professional gardener before turning his hand to furniture making. In 1981, he moved to Israel, married, and raised four children while working as a furniture maker, silversmith, goldsmith, and ornamental wood turner. He served in the Israel Defense Forces Reserves for sixteen years, and when not on active duty he worked in government and private security. He has also served in senior management positions in two software development companies in Israel. During his time in Israel, Mr. Showalter published articles dealing with international terror and the Israel-Arab conflict in the Jerusalem Post, Israel national News and several political science web sites. Mr. Showalter returned to the United States in the fall of 2003, to care for an elderly parent. He published his first novel, “The Big Bend”, in the fall of 2008. His second novel, “Hog Valley”, is now in print. Mr. Showalter's third novel, “Twisted Key”, was published in the fall of 2011, and his fourth novel, "Lonesome Cove" is now available in Kindle format and should be published in paper near the end of 2012. Those words were written a few years ago. Frankly speaking, the literary well has dried up. I now live in Dunnellon, Fl, where I amworking as the caretaker on a horse farm and looking to build a workshop here on the property where I can get back to building furniture. With any luck I will be sinking piers some time early in November and hope to have the floor joists ready for flooring by the end of the month. I'll get back to you on that.
View all posts by Gary Showalter →
This entry was posted in Furniture Making, Woodworking tools and equipment and tagged furniture making. Bookmark the permalink.
%d bloggers like this: